The general opinion was that our A.G.M. weekend in Arundel was one of the most successful so far.  It took place from the 4th to the 6th April at the 'Norfolk Arms' hotel, a Georgian coaching inn built over 200 years ago.  Apologies that this page takes some time to download - we have lots of pictures and hope that you'll feel that they are worth the wait. 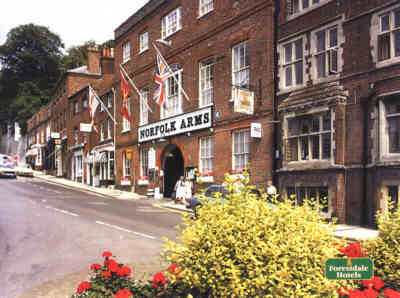 Even before the weekend started, there was an item in "The Argus". 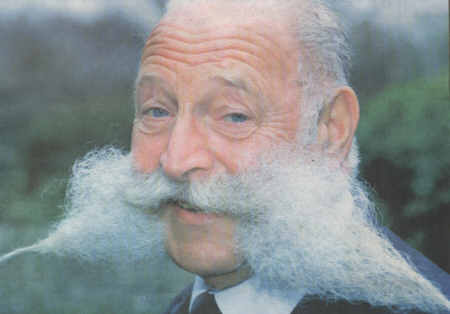 WHISKERED WONDER: Mike Solomons, also known as Mr Moustache,
will meet up with other club members for their annual get-together

ONCE seen, toastmaster Mike Solomons is never forgotten.  Thanks to his mammoth 25in upper-lip appendage, the self-styled Mr Moustache is a familiar sight around his home in Findon, Worthing.

This week. Mike's moustache will be in good company at the annual general meeting of the Handlebar Club.  The society, which meets in Arundel tomorrow, celebrates Britain's most fantastic facial furniture.  There are, however, strict entry requirements to the club.  Members are required to have "a hirsute appendage of the upper lip, with graspable extremities" - and beards are banned.

Mike, 64, the club's vice- president, said: "At one time we had more than 200 British members but now we have just under 50 with a lot of associate members abroad.  There are not many men who grow moustaches long enough today.  We have no female members either though we couldn't close the door if one came along with the right moustache."

Mike adheres to a strict grooming regime to ensure his moustache remains pristine when on official duty at weddings and bar mitzvahs.  He said: "I use a little moustache wax every morning otherwise it would droop and I'd look like a walrus. I also shampoo it every day.  My wife has always known me with it and we married 40 years ago. It was not as big when I was in the RAF but I had a small handlebar then and it has grown ever since.  At its longest it was 34in, which, at the time, got into the Guinness Book of Records as the longest English moustache. It’s now 25in long.  Our President Ted Sedman took my place in the Guinness Book of Records with his moustache which grew up to 60in."

The Handlebar Club was established by Jimmy Edwards in 1947 to raise money for charities such as Barnardo's.  Guests from Belgium, Germany, Sweden and the USA are likely to attend the AGM.

And, under the heading "Hirsutes you sir. . .", there were pictures of Richard Stooksbury, Alan Gear, Tom Clark, Michael Attree, Alf Jarrold and Gary Hagen.

On Friday, before the meeting, we had a few photographs. 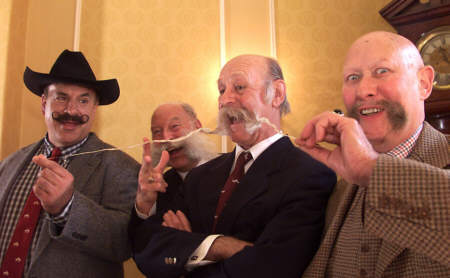 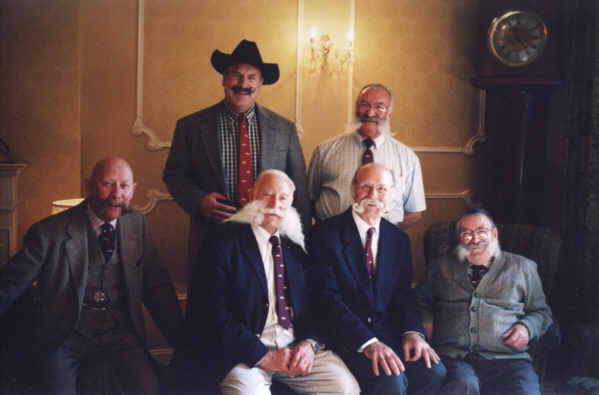 On Saturday morning we had a tour of Arundel, followed by lunch at the "Black Rabbit" pub.

After an afternoon visit to the Wildfowl and Wetlands Trust, we returned to the hotel for our "Gala Dinner" and some very good pictures of this taken by our Belgian friends can be seen on their web site. 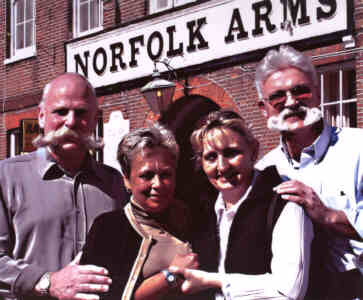 On Sunday our weekend finished with a visit to the Castle which dominates the town.   It is the home of the Duke and Duchess of Norfolk, who have made it a very interesting place to visit. In the grounds that day there was an exhibition of falconry, and the fact that Conway was 'buzzed' by an eagle and had to duck added to the entertainment! 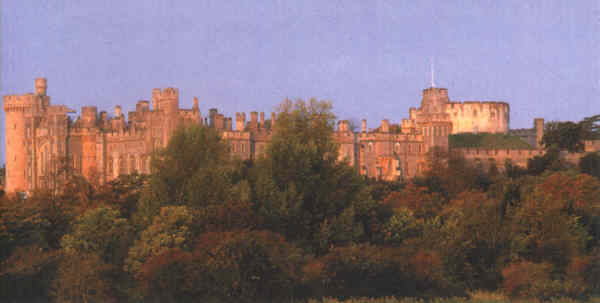 And the following Thursday the front page of the "Littlehampton Gazette":-

ARUNDEL residents and visitors may have noticed an unusually high number of handlebar- moustached gentlemen in their midst over the weekend.  That's because The Handlebar Club was in town for its annual meeting; although it wasn't all work, work, work, as members had plenty of time to socialise at the Norfolk Arms, where they were based, as well as to soak up the culture and atmosphere of the town.

"We choose a different venue each year for our AGM and we are so pleased we picked Arundel this year. We couldn't have wished for better weather, and our members have enjoyed an organised walk around the town as well as trips to the castle and Wildfowl and Wetlands Trust," said president Ted Sedman. 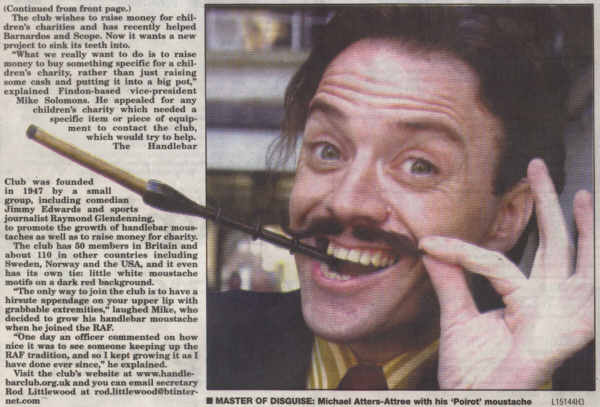