The World Beard and Moustache Championships

It was an early start on Thursday morning. Getting up in the middle of the night, Ted and Alf met up with Rod on the 6:17 bus from Teddington to Heathrow. Only just, because it was running five minutes early, but we did make it. So we had breakfast at Heathrow where we met up with Paul and Bruce who were going to cover the event for GQ magazine.
After an eleven-hour flight to San Francisco we didn’t feel like a four-hour wait in the airport, so we took the courtesy bus to the Marriott hotel and had a few drinks there, with a free bus back again to the airport. A fellow passenger pointed out to Alf that smoking was not allowed on the bus. Our new friend explained, "California has a smoking area; it’s called Nevada!"
After a short flight to Reno we were met by rows and rows of gambling machines before we even got out of the airport. But soon we were being greeted by Ann who was the tour organiser, plus old friends Bruce and Tommie Roe from Washington and Dan Sederowsky from Sweden. So off to the Pinon Plaza Hotel in Carson City for a welcoming reception where we met up with lots more old friends including Ken Cantamout, and fellow Californian Gary Hagen with whom we had only corresponded previously by e-mail. We had been awake for more than 24 hours, so we only had a few drinks in the bar before retiring to our rooms where we had the most enormous king-sized beds - at least 6 feet wide. 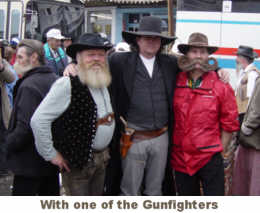 On Friday we all went on a coach tour. The fact that the commentary was in German made it more interesting as we tried to guess what it was all about. Ascending through rather barren country we arrived at Virginia City, a gold mining town where Mark Twain had adopted his pen name while working for the local newspaper. There were several bearded characters wandering around whom we initially took to be members of our group. But when one of them showed his Gunfighter licence we discovered that they were cowboys and part of the scenery. The locals assured us that the temperature had been in the 70o / 80o F range a few days earlier, but when we got there the snow was coming down almost horizontally. So we had to go into a bar for a few drinks, before going into a gold mine. 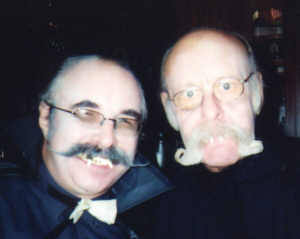 In the evening there was a Halloween party. Rod went as Count Dracula but nevertheless he recruited a new member for the Handlebar Club, Jeff Well from Washington. Ted was a junior vampire, but he had a problem:- he had to take his teeth out whenever he wanted to say anything. Then back to the hotel bar for a few drinks.

Saturday started early after limited sleep as our body-clocks still hadn’t adjusted for jet-lag. Eventually we all gathered in the right place for the start of the parade, where the pre-jury checked that everyone had entered in the appropriate category for the competition.
The Nevada day parade was watched by a crowd estimated at 45,000, and the 130 entrants for the World Beard and Moustache Championships formed just one of the many features. But we reckoned that most of the groups marching in front of us must have been riding on incontinent horses - we had to step very carefully! So we marched off in alphabetical order:- Austria first, England second, then Germany, Hong Kong(!), etc. with U.S.A. bringing up the rear. 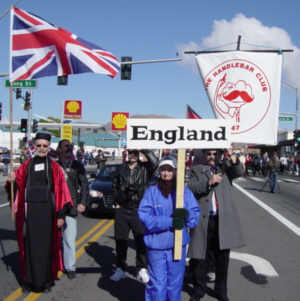 We were led by our cheer-leader, Haley, carrying the "England" sign, followed by Rod with bowler hat, umbrella, union jack waistcoat and his new Handlebar Club banner. Alongside him was an unrecognisable Ted in Chinese costume waving a large union jack (we had been walking for ten minutes before Ken realised who it was!). Then came David Dade, an Englishman with a beard, together with some Californian members who had decided to be English for the day: Ken Cantamout (wearing Rod’s badge), Jackson Eldrige and Gary Hagen. Finally came Alf, being driven in a convertible and waving regally to the crowds. 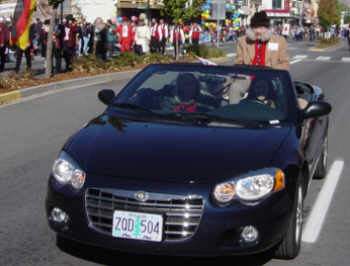 Further back Ken’s friend Dave became an honorary Swede for the day, since there was a shortage of cheer leaders. Otherwise Dan Sederowsky as the only Swede would have had to carry the "Sweden" sign in addition to his national flag and his club banner (and his yellow and blue moustache!)
As the parade ended, Keith Axelson appeared and introduced himself. Keith was the first American member of the Handlebar Club, having joined as a result of meeting John Roy in Tokyo in 1982. It was great to meet him for the first time. Rod and Alf went back to the hotel for a few drinks while Ted went to watch the celebrations at the City Hall. This resulted in more interviews and photographs. By the end of the weekend we had all lost count of the number of interviews that we had each given. We certainly had plenty of practice! 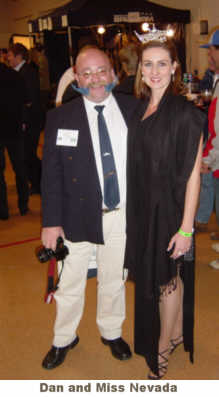 Thence to the "Community Center" for the competition. There were "pre-jury"checks on a few late entrants including Jackson to whom Rod had sent an e-mail saying, "What do you mean you're not entering!! Enter or be expelled from the HBC!!!", and then everyone paraded into the hall to more cheering crowds. Next the judges were introduced - a very distinguished panel including the City Mayor, a Supreme Court Judge, Miss Nevada and two Olympic Skiers. There were seventeen categories in the competition, and in each group all the entrants paraded down the "catwalk" in front of the judges so that the finalists could be selected. "Big Joy" a VERY large comedienne kissed us all and we went back to our tables for a few drinks.
After this first round a band played during the interval and a very generous buffet supper was served. In fact all the meals that we had in America consisted of very generous portions. And it was announced that they were offering two drinks for the price of one. So we had to have a few more drinks.

So, on to the finals in each category, where Handlebar Club members had unprecedented successes. Our new member Jeff Well won the "Dali" class; Gary Hagen won the "Handlebar" class (in spite of his accident with overheated curling tongs just a few weeks earlier!); Bruce Roe came third in the "Wild West" class; Ted Sedman won the "Fu Manchu" class; Jurgen Burkhardt came third in the "Imperial Moustache" class; and Alf Jarrald won the "Sideburns" class, to cries of "Alf!... Alf!... Alf!" from the audience, after they had been told that Alf was 82 years young! This time the winners received a kiss from "Mrs. Washington" (Bruce Roe’s daughter) a reward much appreciated! And last of all came the grand final in which the seventeen winners competed for best overall. Not unexpectedly, the overall winner was from Germany, but to our surprise and delight Alf came second overall (more cheers from the audience!). So we had a group photograph of all the Handlebar Club members and returned to the bar in the hotel to celebrate with a few drinks. 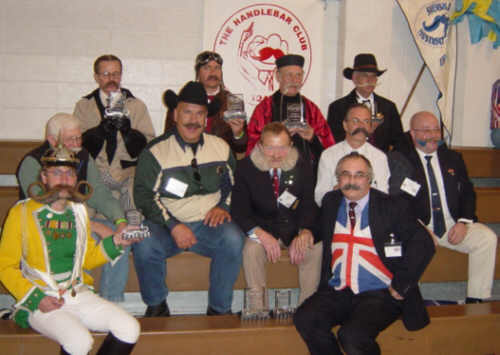 On Sunday morning we had a coach trip, with a later start. Touring the older part of Carson City we stopped to see the Governor’s house which had been decorated for Halloween with pumpkins, tombstones, witches, etc. 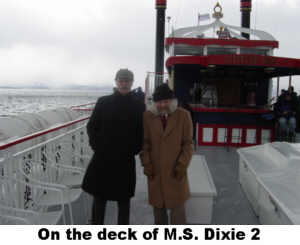 Then up to 6,000 feet to Lake Tahoe where we had a boat trip on a "Stern Wheeler". The scenery was glorious, but it was snowing when we went up on deck, so we soon had to come back inside and have a few drinks. Ken took over the on-board televisions and gave a show of his pictures from the parade and the competition, much to the appreciation of all the passengers.
Then the coach took us to a big casino right on the state line next to California. Gambling is legal in Nevada but not in California, so the casino is as close as it can be to the latter. 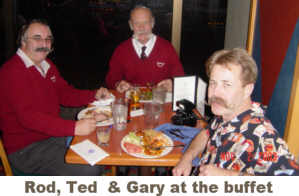 No-one won a fortune (at least no-one admitted to it!) but no-one lost a fortune either, and we had an excellent buffet meal. Two of our number, who had better remain anonymous, were a bit late back to the coach with the driver getting rather nervous about whether we would be able to get out before the falling snow made the road impassable. But we got back safely to the hotel where we were buttonholed for one final interview before we could go to the bar for a few drinks.

Monday was departure day. Rod got up early to say goodbye to the friends who were leaving at 6:30 a.m. but Ted and Alf were still asleep! Another enormous breakfast, after which Bruce and Tommie kindly drove us to Reno airport where Rod had a last (unsuccessful) attempt to win a fortune. Thence to San Francisco followed by a long transatlantic flight. Alf had a slight problem in that he couldn’t hear any sound from his headphones, even when he adjusted the sound level on the control panel. But Rod pointed out that if he were to put the headphones on his head he would have a better chance of hearing through them! Arriving in London around mid-day on Tuesday, we found that the weight of the trophies had caused the suitcase handle to break! We still can’t believe that it had all happened in only three days. We await with anticipation the arrival of the calendars that we have ordered.

And we went to the "Windsor Castle" to talk about it, and had a few drinks.