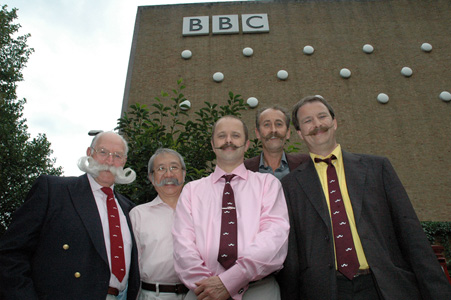 Well as predicted I got a call from the despicable Parsons the week before last to let me know that we had been accepted for the show. I was rather eyeing up the reserve spot but an email from '12 yard' scuppered that idea. Of course I could have just not gone, I could have pleaded sickness or insanity but we Andys are made of sterner stuff. On one hand it seemed like it might be a bit of a hoot, on the other hand, the idea of spending a week in the Thames with a pencil in my eye was starting to look like a preferable proposition.

The filming occurred on September the fifth. I caught an earlier train than I thought I would and it stopped less so I thought I would be preposterously early and phoned the despicable Parsons to let him know. He was in the same boat and we agreed to meet up at the studio early and see if we could scavenge some breakfast there. In fact neither of us were as early as we had anticipated but when I arrived at White City tube there was Steve, sitting on a wall smoking a cigarette, and when he had finished that we entered the bowels of the BBC studios. We sat about for half an hour or so waiting for the '12 yard' girls to come and get us and by that time it was about 10.30, the allotted time for our arrival and they had managed to find Mike, William and Albert somehow. Rodders (who had got the reserve spot) phoned in late so we ploughed into the ‘Green Room’ (which was a very fetching shade of blue) for the initial briefing. The format of the game and the rules were explained, we were drilled into remembering the names of the enemy team, Rodders arrived and a wardrobe woman that wanted to see what shirts we had brought with us so that we could be colour coordinated. I was wearing the shirt that I was hoping to use on the show but since they were going to take the shirts to wardrobe to be ironed. I presume the wardrobe woman selected the ‘spare’ shirt because she was not sure she would be able to trust herself if confronted by me topless. Parsons (being a complete girl) had a wardrobe full of brand new shirts, William had a selection of half reasonable ones but eschewed them all in favor of a shiny grey frilly-fronted affair, the likes of which I have not seen since Adam and the Ants were number one in the hit parade. 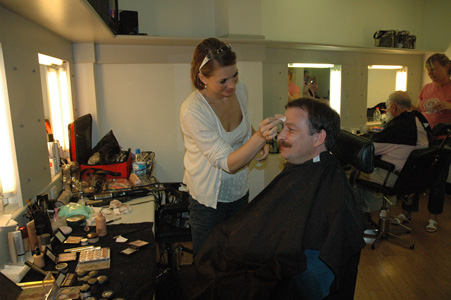 Andy & Mike in the make-up room.

Well then it was off to wardrobe. I was somewhat concerned that they would be making us wear lipstick and rouge and (for some of us) toupees. This would, of cause, have been water of a duck’s back the despicable Parsons who, it transpired, was something of a lipstick wearing goth in his youth. As it happened there was nothing more involved that a quick powdering.

We then went into the studio, in advance of the quizmaster, (Dermot Murnaghan) and the enemy, for sound checks and drilling on which camera did what. It was then discovered that the neck did not do up on my spare shirt so a runner had to be sent to pick up the one that I wanted to wear in the first place, it had a quick once over with the iron, the microphone had to be re-plumbed and I reappeared 10 minutes later, not exactly flavor of the month.

Rodders was doing a stalward job of being useful, taking photos and suchlike and the rest of us took our seats for the inevitable drubbing. 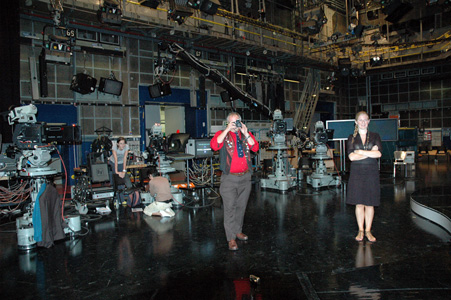 Rod taking photos of the team in the studio.

The first question was about history and Mike put up a more than creditable effort, taking it up to the sudden death but was sunk by a question about German battleships. The next set was about books and music and Albert took it on, in spite of the fact that he knows a lot more about music than he does books. Not to take anything away from him but he was pretty lucky. He got one of his questions wrong but so did his opponent CJ and when it went to sudden death CJ fell apart so quickly people were in danger of getting hit by the shrapnel and Albert won !!! Horray one all and perhaps a modicum of pride saved. The next round was on sport. No one had any knowledge of sport whatsoever and to his credit the despicable Parsons took up the gauntlet but was slapped several times round the face with it and spat out getting only one question right. I was hoping that the last question would be on science, about the only category that I had half a chance of being able to answer anything on, but it was on politics. There was just William and myself left to answer and neither of us wanted it. I offered to flip a coin but William was clearly not going to budge so I heroically took the bullet for the team. What I know about politics could be writ large on a gnat’s bum with a blunt pencil and it was a minor miracle that I even got one question right. 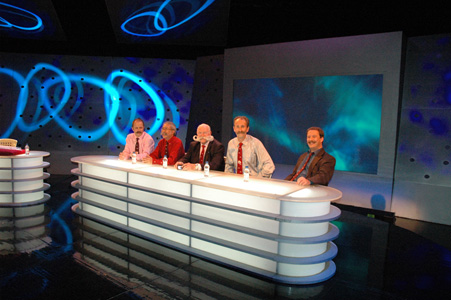 Meet the team from the Handlebar Club.

That left William, who had got away with not answering any questions, and Albert against four eggheads in the general knowledge round. I was not actually present for that, being still sat in the other room, but I got the distinct impression that it did not go well. They started with a question on 'ludo' which they got right and took a guess at the other two and got them both wrong and that was that, game over, a sound drubbing and yours truly being made to look like a clueless halfwit. In fact I did know the answer to one of the questions that Albert and William guessed at so it should be a medal for me for selflessly laying down my self respect for the team and a kick up the arse for William who didn’t but should have.

In fact I did not dread the affair as much as I had thought I would. Having now seen the program I did look a proper twit raising and lowering my eyebrows in an unnecessary manner. I did not even realise I was doing it at the time. The enemy themselves were really friendly and not at all stuck up and it was as good a way to spend a day as any I would say. I had never been filmed properly so that was my 15 minutes of fame and I did learn several things. I now know who the foreign secretary was in 1999, will remember to stop doing yoyo impressions with my eyebrows and several other things, but I think the most important thing I learnt is that next time Parsons rings up with an equally half-baked idea to tell him to go and boil his head. 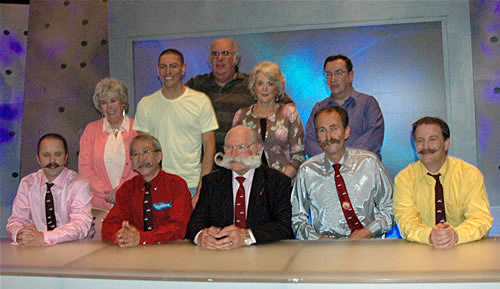