At our darts match we were photographed and interviewed by a reporter from the "Observer" newspaper, resulting in the following article.

Smoothies need not apply: the Handlebar Club accepts only the most magnificently moustachioed.    By EMMA COOK 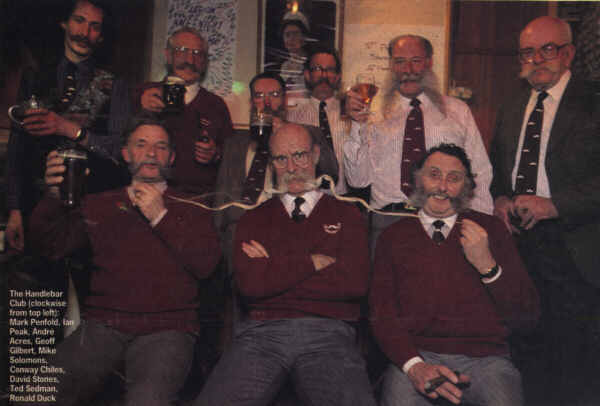 ‘In polite company it unwinds to just below my waist. In less polite company it's somewhere below my thighs,’ declares Ted Sedman, computer consultant and the proud owner of a 56in moustache, recognised as the longest in Britain. He is also a member of the Handlebar Club, which meets on the first Friday of each month to socialise, organise charity events and discuss the minutiae of moustache etiquette.

The club started after the war and has continued to attract a small, devoted following. It now has about 100 members worldwide. Sten-Erik Molker, now 75, is a founder member of the Swedish branch, which has more than 30 members. ‘I'm rather English-minded,’ he explains. ‘It's so nice to be a member of such a British club.’

The Handlebar Club prides itself on its exclusivity. Any prospective member must, according to the rules, have a ‘hirsute appendage with graspable extremities’. Mike Solomons, club treasurer and a member for 31 years, has a stern attitude towards deviant fuzz. ‘We frown on beards,’ he says.

Formerly head of cameras at Thames Television and now a toastmaster, he is firm about the rules of moustache maintenance, ‘it has got to be grabbable at either side,’ he stresses. He first cultivated his own when he joined the RAF in 1959. ‘I went in with a small handlebar,’ he says, ‘and came out with a big one.’

Members have been known to sacrifice their moustaches, but only in extreme circumstances. Conway Chiles originally joined the club in 1954. ‘I did shave mine off for six or seven years when I was chasing an Australian girl. It was a desperate attempt and I still didn't get her.’ He decided to grow his moustache back and is now vice president of the club.

David Stones, a theatre producer, believes a handlebar can be a psychological shield. ‘I think it's a kind of shyness. People will always look at your moustache rather than you or your face.’ But Mark Penfold, the club's youngest member at 35 and a barman in north London, feels that his modest cultivation sets him apart. ‘I've had a moustache since I was 15 years old,’ he says. ‘It's my piece of individuality.’

As a result of the above, the Club made an appearance on the "Big Breakfast" television programme, and subsequently a request for interviews and filming was received from an Australian TV network.  This duly took place in late May at the "Windsor Castle". 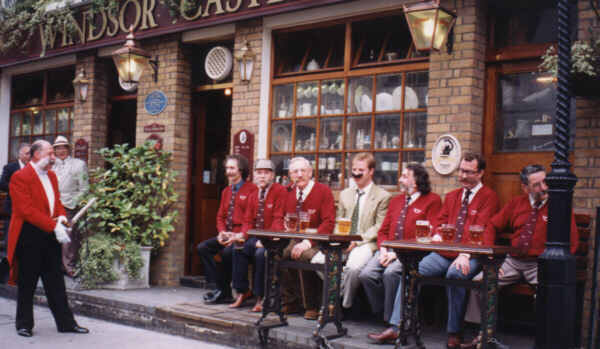