A few of the highlights of the year

Get a handle on this...  Report by Julia Taylor 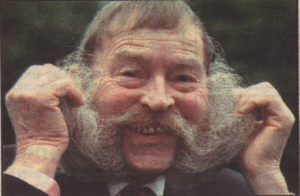 When Alfred Jarrald props up the bar at the Oakfield Club in Sale, home to his branch of the Royal Air Forces Association, he needs two bar stools. For his moustache, when unfurled, is 38 inches wide!

Alfred, a lively 78 year old from Yew Tree Lane, Northenden, was featured in "Dazed and Confused" mag when he came within a hair's breadth of winning his section in the recent International Beard and Moustache competition at Ystad, Sweden, coming in fifth. Alfred said: "We went before eight judges who compared us and then gave us a certificate."

But Alfred's whiskers are hard work: "I have a shampoo twice a day, shape my moustache and then spray. It takes a lot of looking after. I can't just have a quick wash and brush up. I have to allow 20 minutes to half an hour before going anywhere."

If it weren't for a mischievous streak Alfred would never have grown his Jimmy Edwards style crowning glory. "I grew it to be awkward in the RAF during the war. I had it forcibly shorn a couple of times," he said.

Alfred joined the Handle Bar club ten years ago. They raise funds for charity.
Alfred never has a bad hair day because his tache pulls in the birds.
"You get these women who want to touch it," he said with a satisfied smile.

The December issue of the magazine "The CHAP" has a brief description of the Handlebar Club and a questionnaire answered by the Club President.

The magazine has a web site at www.thechapmagazine.com

On Friday November 17th, Rod Littlewood, Mike Solomons and Ted Sedman appeared on a children's television programme "The Top Ten of Everything".  As well as the ten longest moustaches, the programme featured the ten strongest men and the ten foods that caused most flatulence!

An enjoyable day was enhanced by the fact that, as well as our expenses, the producer gave the Handlebar Club fifty pounds which has been donated to the Starlight Hospice for children.

Abbeyfield is one of the largest providers of sheltered housing in the voluntary sector, and the Abbeyfield Society of Hastings and St. Leonards invited the President of the Handlebar Club to open their "Strawberry Fayre" on July 8th.  Ted made a short speech and presented a cheque from the Club.  The event was in aid of their Amenity account, which runs the minibus and provides outings for the residents. 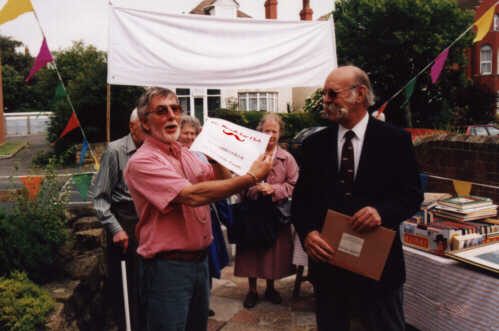 The resident Warden, Ian McNulty, accepting a cheque from the Club

The Club was well represented at Ted Worth's funeral 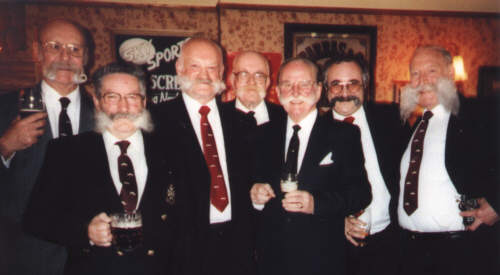