This year the AGM was held at the Crown Hotel, Boroughbridge, North Yorkshire.

Throughout the weekend a great time was had by all, thanks to the excellent arrangements made by our local member Edward Winpenny.  On the Saturday morning we visited Ripley Castle which we found very interesting.  Mike Solomons gave us each a wooden spoon which we had to hold up for identification purposes.  Only afterwards did we discover that this was all an April Fool joke.

With our wooden spoons

Then we went on to the Black Sheep Brewery, and were greeted by Jim, their chief tour guide, carrying his shepherd's crook.  In honour of the occasion, Jim had shaved his beard to give a very presentable handlebar. 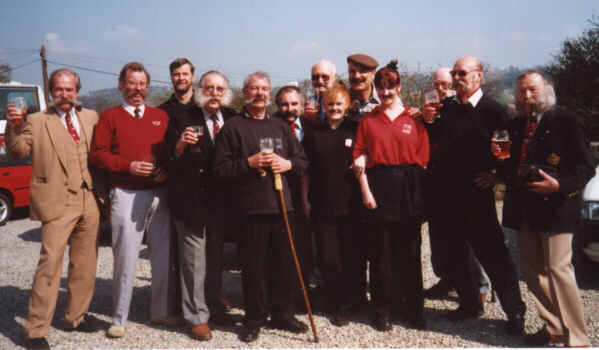 As well as having a most amusing tour of the brewery, we were required for various publicity photographs.  For each one we were given a glass of beer which of course couldn't be wasted. 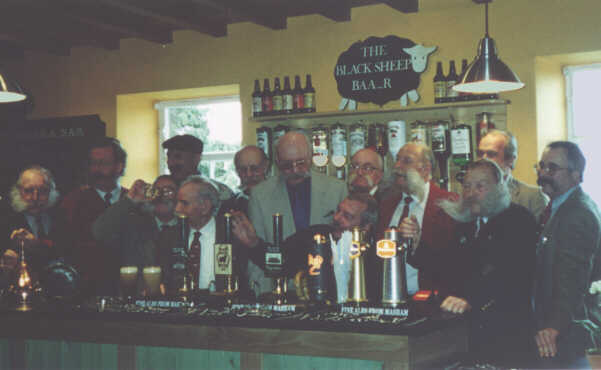 The Handlebaa..r Club behind the baa..r at the Black Sheep brewery.

Our coach then took us on a tour of the Yorkshire Dales, before returning to the hotel at Boroughbridge.  Later in the evening Jim and his family joined us at the hotel, and he was given an application form to join the Handlebar Club.  Sadly, the latest news that we have heard is that his wife has hidden the form because she wants him to grow his beard again!

On the Sunday we had another coach tour, visiting other places in the Dales.   Lunch was eaten at a pub where the ceiling was decorated with a vast array of chamber pots.  And so ended another very successful AGM weekend.

We were featured in at least three local newspapers.

They may not be in the first flush of youth, but out of date? . . .
the reunion men bristle at the very suggestion

GOATEE beards may be all the rage now, but the height of facial fashion was once the handlebar moustache.
Made popular in the 1940s by dashing young RAF men who prided themselves on being a class apart from Navy and Army types, wide whiskers are now a rare sight. But they were back on bristling parade at the weekend when the Handlebar Club held its first annual meeting in Yorkshire, at Boroughbridge.
Moustaches were compared and tips swapped on how best to keep the whiskers in trim and pointing in the right direction. Ex-RAF man Ted Winpenny, a veteran Press photographer from Otley, was among them. "It’s been said that we’re old-fashioned and not trendy and ‘with it’," he said. "Well, perhaps it isn’t trendy, but I'm very much attached to it and I've never shaved it off." The downside is eating cream buns, he said, but "our moustaches come in handy for a drink after time - think of all the beer we can soak up."
Each branch of the club is known as a "nest", which Mr Winpenny insists is the collective noun for moustached men. Foreign exponents of the big moustache came to North Yorkshire from Holland, Sweden and the United States. Continental Europe has its own clubs, such as Svenska Mustaschklubben and Snorrenclub.
The Handlebar Club was formed in 1947 by, among others, Frank Muir and Jimmy Edwards, and now has about 90 members. Club president Ted Sedman’s moustache is one metre long from tip to tip.
Qualification for membership is:
"a hirsute appendage of the upper lip, with graspable extremities".
Beards are banned.
About 15 members enjoyed a visit to the Black Sheep Brewery at Masham on Saturday.

Let's face it - that's what you call a 'tache

Magnificent: Mike Solomons, from Surrey, shows off the mighty moustache that qualifies him eminently for the Handlebar Club  picture: Richard Doughty

THERE are moustaches and then there are real moustaches - and the hairy gents of the Handlebar Club put their impressive examples to good use at the weekend.
For after holding their AGM in Boroughbridge they adjourned to the Black Sheep Brewery in Masham - where their well-endowed whiskers were hard at work soaking up the ale.
Boasting members as far afield as the US and Europe, the Handlebar Club is a gloriously eccentric group that was set up in 1947, predominantly by former RAF personnel.
The only requirement for membership, as the club rules have it, is "a hirsute appendage of graspable extremities on the upper lip in the handlebar tradition."
And while they do raise money for good causes, the emphasis when they all get together is to have some fun.
As ever, that does occasionally involve a pint or two - and at Masham the club members were keen to prove that froth in the ’tache is not bothersome.
"Drinking beer is not a problem for experts like ourselves and we certainly don't waste any of the froth," said photographer Edward Winpenny, a club member since 1952.
"Our moustaches come in useful for a drink after time. Just think how much beer can be soaked up by a good three-footer."
The club is currently keen to establish a new northern "nest" - the term they insist is the collective noun for a group of moustaches.  And anyone who meets the basic criteria can contact Edward on 01943 462597.

Handlebar Club gets to grips with tasting brewery's output 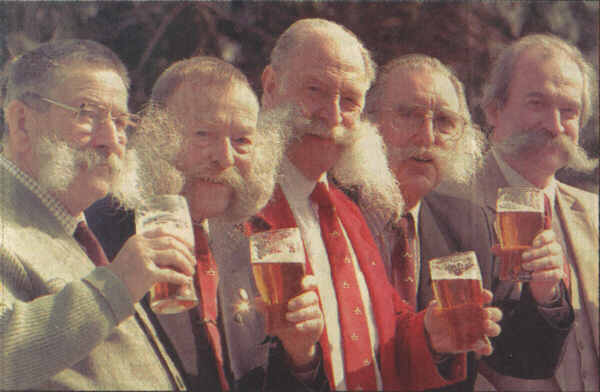