In the middle of November we had a visitor from Germany, Jürgen Burkhardt, whom we last met at the World Championships in Sweden. He came to London to take part as a guest on the TV programme "They Think It's All Over". Five club members were in the audience to see Jürgen appear in his "Kaiser" uniform, and had the pleasure of meeting him afterwards in the hospitality room. 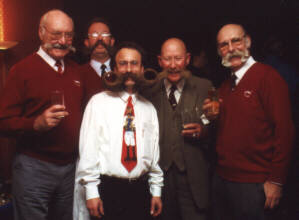 At the BBC  -  photo © Jürgen Burkhardt

Earlier in the day, Rod Littlewood had shown Jürgen around London because it was his first visit to England. And the next day three of us took him to the "Windsor Castle", where we were all made very welcome. Jürgen was fascinated by all the memorabilia and took lots of photographs (he is a professional photographer). And finally a quick look at Big Ben and the Houses of Parliament before he had to rush away to catch his aeroplane.

It was nice to welcome Jürgen to England, and he has already decided to come again, but next time he is going to stay longer.

The December/ January 2000 issue of the magazine "Dazed and Confused" included a feature on last August's Beard and Moustache World Championships in Ystad, Sweden.  Six full-page photographs included pictures of our members Alf Jarrald and Ted Sedman.  If you want to know what products we use to keep our hirsute appendages under control, it's all there!

Our member Ian Peak and his wife Rée featured in a recent article in the Watford Observer, concerning a change of programme by the Watford Operatic Society, of which Ian is business manager.  The article was accompanied by a photograph taken at the "Windsor Castle".  Unfortunately, although it was captioned "Desirée and Ian Peak", it was actually a photo of Ted and Winnie Worth!

Not to be outdone, our secretary, Rod Littlewood, has also featured in a national newspaper.  On December 11th the Weekly News carried a photo of Rod, together with an interview about the results of the recent World Championships in Ystad, Sweden.  He had to admit that all the classes (even including the English Style Moustache!) were won by German competitors, but he emphasised how much we had enjoyed taking part.