Jim Ross, one of our American members, has been scouring the internet for Handlebar Club related items and has come up with some splendid ones.

Back in January 2002 we were filmed by an American company, Mr.Big Film.   The result is to be found at www.mrbigfilm.com/handlebarmustach.html

He also found two items from the 1950's.  If you go to www.itnarchive.com/britishpathe and search for "Handlebar Club" you are required to give your e-mail address, but you can then view free previews of a spaghetti eating contest and also a charity cricket match against the Waistcoat Club.

If instead you enter "moustachier" in the search field, there is quite an amusing item about choosing a moustache.

And finally, at www.archive.org/details/MoustacheDreams you can see a film of what appears to be a moustache competition held in India.

And Kevin Hufnagle has sent me this one. It was produce by the Budweiser brewing company for an ad campaign. Mr. Handlebar Mustache Wearer 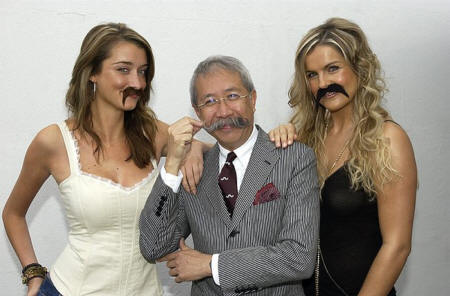 Opportunity knocked when I was approached by Miss Charlotte Musket of Everyman Institute of Cancer Research to participate in a promotional photo shoot for TacheBack 2005 of which they are one of the sponsors.  I accepted the proposal with utmost pleasure, especially when I was told that I would be posing with two extremely gorgeous celebrities namely, TV presenter Katy Hill and Virgin DJ Sarah Champion. (Thanks Ted for the referral.)

The photo shoot took place on 4thAugust at the Westbury Hotel in Mayfair.   A Deluxe Terrace Suite was booked for the session.  After an informal chit chat over a cup of coffee, we started to work with Fergus the photographer whom I remember meeting at the TacheBack party last year.  It was sheer delight to work with such enchanting ladies.  We finished the session in just over an hour and due to some personal commitments following, I had to leave immediately.  What a pity!   However, it was indeed an exciting and memorable experience that I think would be the envy of many, not to mention Atters for a start.

Do check out the following: - www.icr.ac.uk/everyman/tacheback/index.php    -  Albert

Earlier this summer we held a BBQ in Leatherhead in the delightful gardens of Carolyn & Geoff. (For those who don't know Carolyn is Rod's sister)

Ted kicked off the informal affair by welcoming everyone, but had to relay some bad news regarding Alf’s daughter. Since the meeting we have received good news that she has made a positive recovery. We were also introduced to Paula, a colleague of Mikes, who has been asked to assist us on the 2007 Brighton event.

As well as good weather there was an excellent selection of food presented by our hosts and expert cooking by resident 'Chef', Geoff, plus an excellent choice of tipple selected by the ever ‘looking for a cheap way of getting pissed’, his words not mine, Rod. The get-together was supported mainly by the 'southern faction' and was well worth the effort.

One of the highlights of the day (no not the tour of the fruit nets) was the diversity and musical talents of both Albert & Andy, not together, I must add - although that would prove to be interesting. Maybe there is something here that could be worked on for Brighton! 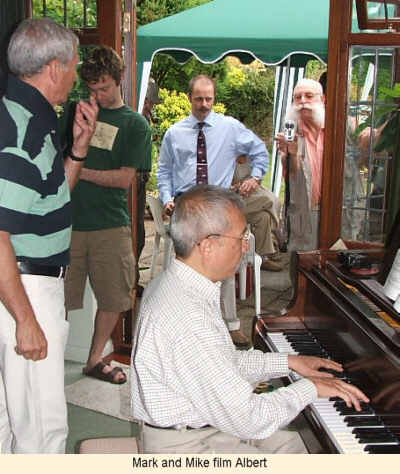 We were joined by Dan & Mark, two young film producers who are making a documentary about the Club. If you remember they had already been to the Windsor Castle and the darts match and at the ‘Beard Olympics’ in Austria.

Those who made it were, Conway & Rosemary, Ted & Stella and their French student Annelise, Mike & Mary and their two friends Martin & Sue, Steve, Andy, Albert & Kiyomi (who was desperately trying to find a TV for the Wimbledon results), Charles and his daughter, who's name eludes me, myself & Valerie plus at the latter part of the day we were joined by two of Geoff & Carolyn’s neighbours. No, not complaining about the noise, just trying to crash the party and hoping to sample any drink that happened to be left. Charles had moved away and lost contact with the Club for a couple of years, learnt the error of his ways, decided to rejoin and acquaint himself with friends old and new. And what an excellent example of the ‘hirsute appendage of the upper lip’ if I must say so.

The BBQ plus raffle managed to raise a total of £240.50. Already looking forward to next summer.

Sunday 11th September 2005 dawned grey and overcast, a day which proved to be ideal for cycling, as the Handlebar Club team met up to ride 50 miles to raise money for the "Make-a-Wish" foundation. This worthwhile charity grants wishes to children with life-threatening illnesses.

Our team leader, Ted Sedman, Stella his wife, Rod Littlewood, and two Friends of the Handlebar Club, Steve and Janet Mitchell with their 14 year old son Stewart met in Camberley at about 7.40 a.m. for an 8 O’clock start to ride a circular route from Camberley to Blackmoor in the beautiful Hampshire countryside and back again. There were 500 riders in all, some riding to Portsmouth, as we did last year, and some doing the circular route.

The Mayor of Surrey Heath said a few words, sounded a horn and then Ted led the cyclists off at the start, riding his penny-farthing bicycle in full 1880's costume to match the bicycle. He set off at a cracking pace, setting his team a fine example which they found hard to follow. The business park area of Camberley soon gave way to small towns and then the beautiful countryside showed itself in all its pre-autumn glory. Stops to refresh oneself with juicy blackberries whilst admiring the view of ploughed fields and distant farms gave welcome relief from going up winding hills that seemed to come more often than the downhill rides. The five of us regrouped now and again and then kept together, cycling harder with the thought of a cup of tea at the café at the half way stop.

On arrival at the Blackmoor farm shop café we were disappointed to be told that the café had decided not to open that day, only giving the Make-a-Wish foundation three weeks notice of their decision by which time all routes had been planned. But Waitrose the supermarket came to the rescue and kindly donated Mars Bars and bottles of water for 500 cyclists by way of refreshment. "A Mars a day helps you work, rest and play" was the slogan when Stella was young, and it certainly helped the cyclists along in 2005. Ted had been waiting for us for some time, but had been able to rest himself before the next 25 miles.

Ted, Stella and Stewart, a very laid back young man who cycled effortlessly, rode along together before we stopped for a picnic lunch by the River Wey where we were soon joined by the rest of the team. It was delightfully cool, looking at the water in the quietness of the landscape.

Together, refreshed we set off for the "Half Way House", a pub which helped us quench our thirst before the final ride back. The route was quite hilly, but it did provide wonderful views and we could see the progress of the team members as we walked up some of the steeper hills.

Soon we came to residential areas where we met more traffic, but with our bright yellow T-shirts we were very visible.

At last we were back, tired but happy, knowing that we had helped children to do something special, realising how lucky we are to be able to ride bicycles and walk up steep hills. As Ted, Rod and Stella were putting bicycles onto Ted’s Morris Minor, a very lean, fit young man on a racing bicycle came into the car park - he had cycled to Portsmouth and back again! Oh to be so young and so fit!

Thank you to everyone who sponsored us for this ride - your kindness and generosity is much appreciated. Stella

I have received this e-mail from an organisation worthy of support.

A reporter for a local paper here in Nashville, TN turned me on to your organization, and I wanted to reach out to you and your members. As I am sure you are aware, the United States is struggling to overcome the effects of a devastating hurricane season.

To help out, me and some of my college buddies started "Mustache Relief," as a fundraiser here at Vanderbilt University. Basically, we are all competing to see who can grow the "sweetest 'stache" in 5 weeks to raise money for the American Red Cross. We began last week, and we have already raised over $1,000 from our fellow students.

Our response thus far has been wonderful, and one of the major local papers is doing a story on efforts next week. With all of this attention, I thought it would be wonderful if we could form some partnerships with other organizations around American and the World in an effort to help more people. Do you think anyone in The HandleBar Club would be interested?

Swasie, who joined the Handlebar Club a few months ago, has recently been awarded the M.B.E. which he received at Buckingham Palace. 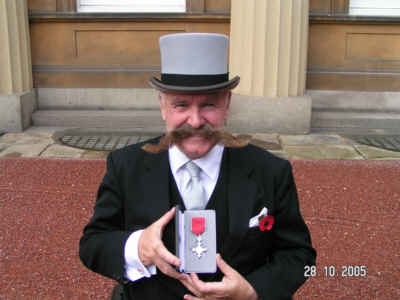 Our new, efficient treasurer has checked through our membership list and has removed those members who have not paid their annual subscription.  As a result there has been a major removal of pictures from the "Gallery".  In addition, these former members will no longer receive the newsletter.

If you think that you should not have been removed, please send an e-mail to Steve Parsons our secretary, and he will be happy to sort out the problem. 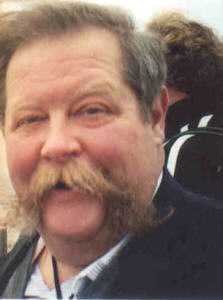 We have had a rather unusual request from the family of Larry Pollock.  Although Larry was eminently suited to becoming a member of the Handlebar Club he never had the opportunity to join, and he sadly passed away on November 25th 2003.  On the second anniversary of his passing his family would like to remember him by enrolling him posthumously into the Handlebar Club and making a donation to our charity account.