At our March "First Friday" meeting we were very pleased to be joined by Renée Desar and her husband, who had come across the pond to visit London for a few days and had got their timing right!  Renée is one of the "Sob Sisters" who last year sent us a copy of their recording "Whiskered Away". 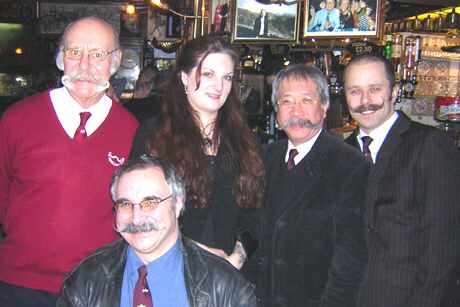 Renée at the "Windsor Castle" with Ted, Albert, Steve and Rod

One of our American members, Jim Ross, together with his wife, came over the pond and carefully arranged to be in London for the "First Friday".  Unfortunately he chose the only month of the year when we don't have a meeting at the "Windsor Castle" because we are away at the A.G.M.  However, we couldn't miss out on an opportunity to have a few beers, so a few of us met up with Jim on the "Last Wednesday". 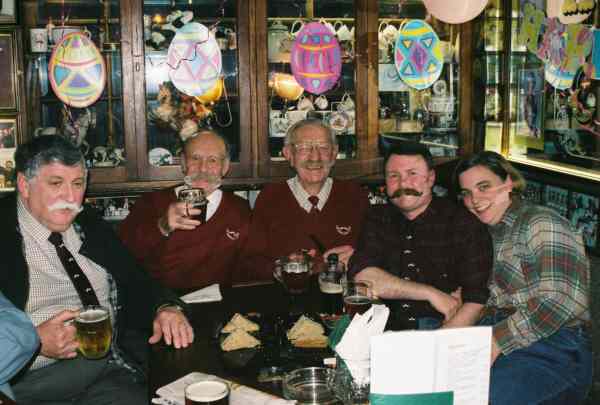 Alex, Ted, Ian, Jim and Ann (plus Geoff's elbow and minus Albert who took the photo)
(and the unusual decorations are Easter Eggs).

The gathering was excellent and Mike Solomons did a grand job once again in organising the whole thing. 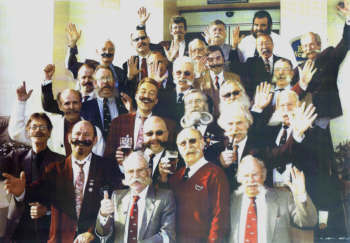 We came from various directions to gather at The Berkeley Hotel on the sea front at Worthing, mostly on the Friday afternoon, and apart from being photographed by the local press, spent most of the time until the AGM itself doing what Mike likes to call ‘Meet and Greet’. The AGM itself went well and we got through the business quite quickly. This year, for the first time, our visitors at the meeting exceeded Handlebar Club members. We had contingents from Belgium, Germany, Holland and Sweden, and they all seemed to enjoy themselves very much.

After the AGM came dinner and there were altogether about 55 of us. This is the highest number we've had yet at an AGM gathering. It's "about" 55 because there were several people who came and went at various times. 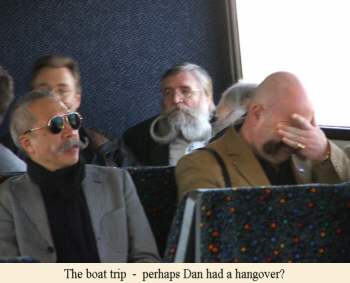 On Saturday we had a visit to the Historic Dockyards in Portsmouth. This certainly is a popular place and one gets a ticket which can be used to visit the various exhibits. The first thing we did was to take a boat trip round the harbour where we saw what seemed to be the remnants of the British Navy. Then it was back to the Dockyard where we split up for lunch in the many cafes. Some spent time in the various exhibition halls which are old renovated dock buildings, while others visited the "Victory", "Mary Rose" and/or the "Warrior". All very impressive and enjoyable. After that it was a leisurely ride back to Worthing. All who went really enjoyed it. 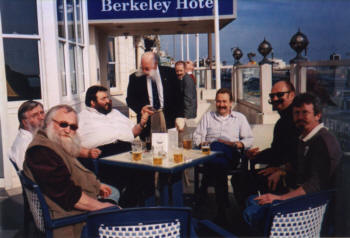 Then in the evening we had another very good dinner followed by our now traditional raffle. This time we made over Ł200 for charity.  The following day, Sunday, most headed homeward, though a few stayed on taking advantage of the generous rates at the hotel.

We were very sorry not to see a number of the stalwarts of the Club this time. Mostly this was due to health problems. They were greatly missed.

In all this was an excellent gathering. If it isn't voted the best one of the lot then it certainly is very near it indeed. It was lovely to see so many overseas visitors. And to cap it all, the weather throughout was absolutely marvellous.                    ( Report by Conway)
(And there are lots of pictures on the Swedish web site at hs.mustascher.se/mustasch/body.asp?s=852)

A full page item in the May edition of "Sussex Life" features the Handlebar Club and our AGM in Worthing. 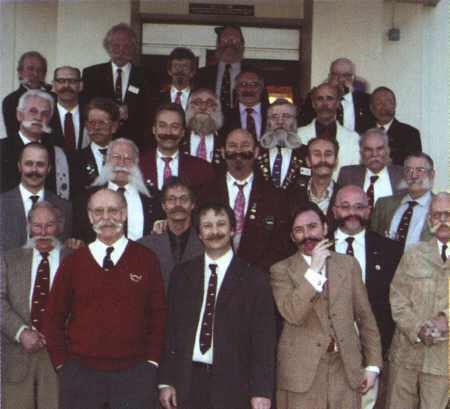 Attendees at the AGM, outside the Berkeley Hotel 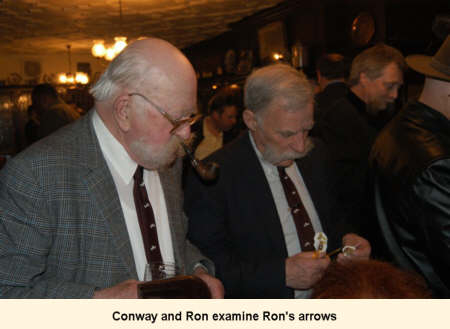 It gives me great pleasure to officially announce (after two years of ritual HBC humiliation), that the Pipe Club of London finally lost the "Heineken" Darts Trophy. It was last seen at the Ship Tavern, Holborn in a ladies shoe box. I am more proud to announce that despite their mislaying this coveted award, the "Knights of Nicotine" finally lost the annual match.

Yes - dear readers, it would appear that our noble Club has become accustomed to the slings and arrows of outrageous pipe smokers. To 'ready-rub' it in as it were, Andy Lear (one of our recent members) won a splendid brier pipe during the Pipe Club raffle. If it were not for the strength of his whiskers, he may have defected. Turnout by both clubs was excellent, as was (creatively speaking) the standard of play.

Over Ł50 HBC raffle money was raised for Geoff Gilbert's Christian Care Trust charity and a sterling evening was had by one and all.  (by Michael 'Atters' Attree)

P.S. A certain official of the Pipe Club (who had better remain anonymous!) had the trophies all along!! He rang our secretary to admit that he had just found them in the spare room at his house. So all's well that ends well.

A very enjoyable weekend.  Click here for a report

A visit to the Snorrenclub in Antwerp where Ted was made "Moustache of the Year".  Click here for a report by Conway Chiles

A visit to the 20th Anniversary Celebrations of the Höfen Beard Club.  Click here for a report by Albert Tang