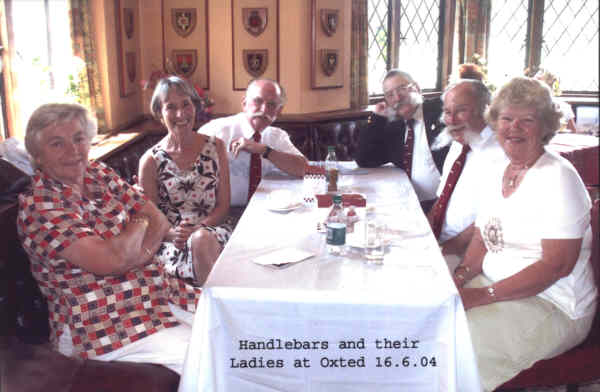 On the 19th June we had one of our 'country meetings' . This was organised by Kath Acres in the Royal British Legion Club in Oxted. We gathered, starting at 12 noon and had a beer or two and then had a very delightful salad lunch with sweet to follow. It was a lovely day and the view from the clubhouse is beautiful. 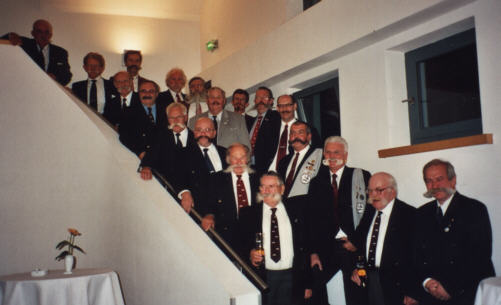 Several members visited Rostock to celebrate the 20th anniversary of the Swedish Moustache Club, and had a most enjoyable time.  Our scribe, Conway Chiles, has written a report, and there are pictures on the Swedish Club's site. (Go to the gallery, and click on "Bilder frĺn 20-ĺrs jubiléet>>") 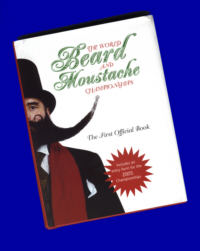 In October "The First Official Book" entitled "The World Beard And Moustache Championships" was launched to much pomp and ceremony (mainly by the Handlebar Club). The publishers turned to us to promote their fine book. This was mainly because certain trophy bedecked HBC members feature strongly within their publication. With Alf Jarrald, Ted Sedman and Jürgen Burkhart (Germany) being World Championship stars, the Publishers knew they were on to a good thing.

And indeed they were, as, for two gruelling weeks we promoted their book, our Club and the 2007 World Championships in Brighton; the media outlets being local and national radio, TV and the press. Our most notable performance was on ITV's "This Morning" and within "The Guardian Guide". As for the goggle box's live broadcast; the programmers were so keen to have us on they even flew Alf and Jürgen to London. Ted Sedman was resplendent in his now famous Fu Manchu costume while Mike Solomons and myself (Atters) completed the studio vignette. Mostly headed by Ted, the radio interviews involved the Danny Baker Radio Show, LBC's the Sandi Toksvig Show, numerous BBC regional programmes and finally Talksport. The latter was a very short interview as both the presenters were "ill". Ted and I managed to briskly talk "moustaches" as a clean shaven bouncer showed us the door. Oh, Fu Manchu!

Next it was off to an autumnal London’s Leicester Square.  Capital Gold’s Paul Coyte seemed rather chuffed as his "lifelong ambition" had been fulfilled; namely meeting some members of the Handlebar Club.  His airwave golden eggs were the Sedman, Atters duo.  Mr.Coyte (and studio crew) were most accommodating with their compliments, cups of tea and mirth. We in turn, were generous with our club plugs, monocles and hirsute advice.  This was fully taken advantage of as we remained there for three sections of Capital Gold’s "Drivetime Show".  Then it was time for the country’s listeners to get their revenge.  Ted and I were thrown to the wolves while the public asked their moustache questions and queries.   Sadly they were mainly about beards and how to wash them (shampoo?).   Ted’s answers were a little more instructive than mine but we battled through.   Pictures and the interview may be found on Capital Gold’s website.

Should you wish to own a copy of this splendid colourful book then pop along to any good UK bookshop. It costs Ł10 and is published (worldwide from next year) by "Boxtree".

Last month Tacheback successfully opened its doors to the hairy and young (well, the Handlebar Club was certainly hairy) for its second annual hirsute extravaganza. GQ Magazine instigated this annual fund raising event to the roll call of  "Grow a tache for cash". Each year its readers are invited to sprout lip whiskers during the month of September. The finale being a stylish strut down a catwalk, bathed in female screams and "popular" music. All this while "The Party Magazine" and press snap away. Naturally there were many prizes, sparkling drinks and pretty girls. Oh, and of course The Handlebar Club.

With a battle cry of  "monocles at the ready!" our Club President led a crack squad of Handlebars into the trendy męlée. We had been invited along to show what happens when one professionally rejects the razor. Sadly with our work done, a stampede ensued for the waiting barbers. I mean really?  It must have been down to the evening's slogan: "Taches are Not for Girls". Again, here I beg to differ. Where fillies are concerned, I always try to offer mine (oh yummy!). Still, such misinformation is heartily forgiven considering the spectacular results Tacheback has achieved.

With sponsorship from friends, the final judging process takes into consideration not only the moustache, but also the money individuals and groups have raised. Last year it was Ł100,000. This year they hope to make even more (with sponsorship still rolling in). Of course for Everyman (the chosen charity which is run by The Institute of Cancer Research) and all those affected by prostrate and testicular cancers, there can never be enough help. Every penny is desperately needed for research. As with last year's event, The Handlebar Club wishes Tacheback every possible success with its splendid campaign. For the latest information visit: www.tacheback.com 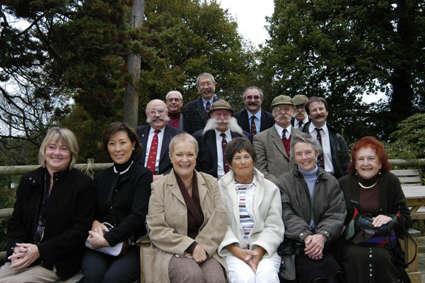 Members, ladies and friends at the "Keeper's Arms"  (photo by Fiona)

On October 17th our photographer friend, Fiona Campbell, organised a most enjoyable lunch at her sister Jenny's pub, the Keepers Arms at Trotton on the Sussex Downs.  With real ale and excellent food, it is just what a country pub ought to be.  Definitely one for a repeat visit! 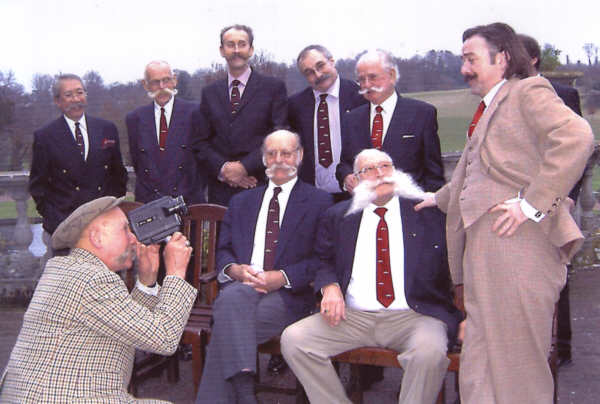 To many, the word 'Epsom' conjures up images of horse racing, green wellies and Magnesium Sulphate. But to HBC members (within reach of Surrey) it means much, much more. Namely festive Handlebar Club 'nosh-ups'. As with last year, our annual Christmas lunch took place within the Epsom RAC clubhouse. Over twenty HBC Members and friends assembled within the plush bar to share bons mots and Christmas cards. We were also very pleased to welcome Bo Jonsson (from Sweden) and some relatively new HBC members. Everyone lunched convivially together on one long and impressively laid out table. The food and service were superb and despite a proliferation of wine on the table, our Club's conduct and dignity led by example. Except for Mike Solomons that is, who pelted mint foil missiles at my waxed purlieus. Coffee was followed by a gentle walk through the lush and spacious golfing grounds to the clubs high-tech sports centre. Here Albert Tang gave us a facilities tour of their torture 'rac'. For many handlebars (myself included), witnessing poor souls exercise was an exhausting experience. Still, we all felt much the better for it and soon settled down in our leather chairs for more idle chitchat, drinks and tobacco. Indeed I must say, this new fitness regime was quite the 'Epsom tonic' (we just add gin). Let us offer a 'handlebar salute' to Albert and his wife Kiyomi (a full RAC club member and keen golfer) for making this really sterling Sunday possible for our own Club members.