The annual duel kicked off one April evening at The Ship Tavern, Holborn. As usual, The Pipe Club of London was our friendly foe. The cad’s tactics were genius in their simplicity. Out of nowhere they hit us with “The Pipe Club Pea-souper!” We didn’t stand a chance. Those rotters blew pipe smoke everywhere! I could hardly see my own cigar, never alone the blinking dartboard! Despite the smog, Conway Chiles did manage to hit a bulls-eye… sadly with his pipe. I missed the board all together. Our members did stand their ground though and we put up a dam good fight with some good scoring. In the end, those pipe smoking chaps disappeared into their smog clutching the coveted ‘Heineken’ trophy. Through all this mayhem a raffle took place. I am pleased to say that we managed to raise some funds for Handlebar member Geoff Gilbert’s care home charity. We also got to win some goodies in the process. One final supreme highlight. A certain Club President who shall remain anonymous (but he’s a pipe smoker that shaves) lost his trousers when the braces snapped. This was well received as we thought the panto season had begun! Luckily I have failed to remember the final match score (or the size of those polka dots). What I can remember is a fun packed evening where clearly the best team won.

This years AGM took place in Eastbourne (the 2nd to the 4th April). As usual handlebars and friends descended from near and far to indulge in hirsute hedonism, moustache wax, splendid food, the Sussex coast oh, and of course that serious matter of Club business “hic!” The weather was superb (bar a short shower) and I’m sure that we can say everyone had a really splendid time. As usual, there was a good “roll call” of members and friends. We were pleased to see Hans Hamrin, Ingrid and Bo Jonnsson and Dan Sederowsky from Sweden. Dany Leenknecht of the west Vlaamse Snorrenclub in Belgium had family members witness his membership acceptance. A charming young lady from BBC’s Radio 4 recorded the AGM for a programme called “You & Yours.” This was broadcast later to the tune of Jimmy Edwards’ “Every girl likes a fella with a bush - upon his moosh!” And who could disagree?  Sadly, a few other ‘regulars’ were unable to attend the weekend for various reasons. Needless to say so one or two glasses were raised to them all “hic!”
The hotel itself was booked at a very reasonable price, thanks once again to our Vice President.  Some may remember that the Cavendish Hotel at Eastbourne was also the venue for our 1997 AGM. The staff were very pleasant (even though the Hotel was being renovated around us). Club matters included a slight increase in subscription fees. Most important off all, we decided to host the 2007 World Beard & Moustache Championships in Brighton City. We also thought it prudent to hold one or more AGM’s in Brighton leading up to the event. The purpose of this is to keep local interest going. Since our announcement, Brighton has been buzzing with excitement and local press coverage… And we haven’t even started yet!
A luxury coach had been hired for Saturday, so it was “all aboard!” for a magical whiskery tour. Even if Rye and Battle wasn’t magical (which it was), it was certainly whiskery once we’d finished… Conway Chiles noted that since his last visit 50 years earlier, Rye had become over run with balley tourists! Then, in a puff of coach fumes he realised that he was one of them. Saturday evening was reserved for much pomp and ceremony (and jam packed it was too). We were screened a Swedish film about moustaches. Dany kindly handed out gifts and later made a fine speech. The famous Handlebar Club raffle continued with the prizes/gifts theme and happily most present were winners. In all, Club money was raised (and so were a few glasses) “hic!” Soon it was time to curl up in ones snood as yet another corking AGM had come to a friendly close… 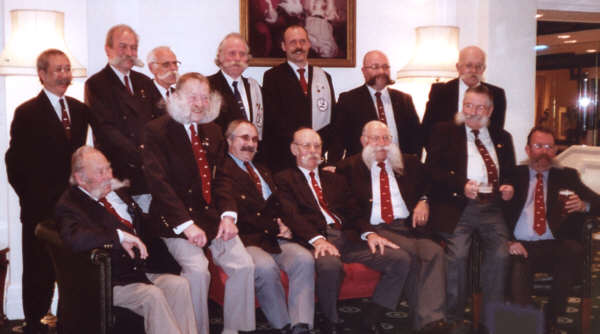 Some of the members at the AGM

The Svenska Mustaschklubben has a new web site, www.mustascher.se, created by Handlebar Club member Dan Sederowsky.  Click on the Union Jack for an English version of their history.  And there are lots of pictures of our 2004 AGM in the "gallery".

This item was seen in "The Times" on January 14th. 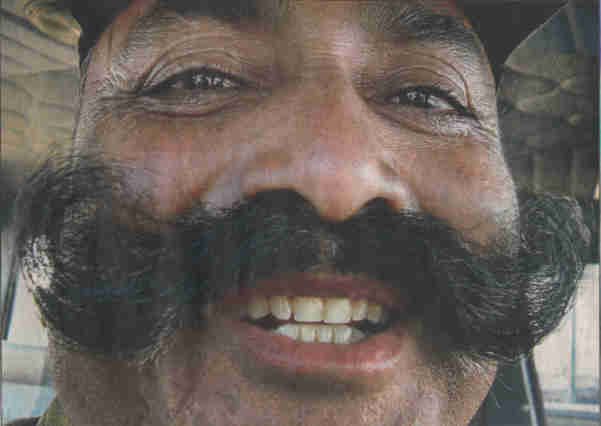 From Nick Meo
in Delhi

THE Indian police force is trying to improve its poor public image by paying officers to grow moustaches.
Indian police are perhaps better known for growing pot-bellies, but chiefs in Madhya Pradesh hope that military-style moustaches will raise officers’ social standing and make them look smarter.
A moustache bonus of 30 rupees (about 40p) a month has been introduced after research showed that officers with smart facial hair are taken more seriously.
Superintendent Mayank Jain said that the shape and style would be monitored to ensure that officers did not copy the look of Bollywood villains, often portrayed stroking their facial hair malevolently during torture scenes.
Moustaches are a traditional sign of virility and authority in India. Maharajas sported them and they are popular with military men. In farming areas, such as Rajasthan, high-caste men compete to grow the most extravagant handlebars, although most city-dwellers are clean-shaven and consider facial hair rustic.
The initiative aims to shake off the whiff of corruption and incompetence tainting the image of India’s police. In some areas officers are often considered almost as much of a menace as criminals, especially in big cities, where newspapers are full of tales of low arrest rates and claims that officers work as hitmen for gangsters.

An interesting contrast with the treatment that our member Joynath Victor De is receiving from Indian Airlines!

Following the World Championships we have featured in a number of television programmes, newspaper articles, etc.
We appeared on "Blue Peter", a BBC Television children's programme.  Then there was an article in the Daily Telegraph Magazine, but the best feature was in the Financial Times Magazine, the author of  this being Fiona Campbell who has for some time been a Friend of the Club.

Individually, Gary Hagen was featured in articles in The Mercury News and the Gilroy Dispatch, Alf Jarrald was in the Daily Express and also the Sale and Altrincham Messenger, recently joined member Rick Brand featured in the Ealing & Acton Gazette and Michael Attree was interviewed for The Insight

In late February Club members were filmed by Univision, a Florida-based Television Company.  And on February 27th we featured in the "Golden Pin", an item on BBC Television London News.  You can find it at http://www.bbc.co.uk/london/yourlondon/golden_pin/ted_sedman.shtml
Then click on Watch Ted's story