An innovation this year was a "Pre-Christmas" lunch organised by Albert Tang at the Royal Automobile Club, Epsom.  There was a good attendance and everyone declared it most enjoyable and a great success. 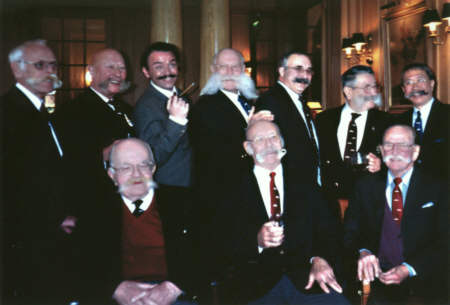 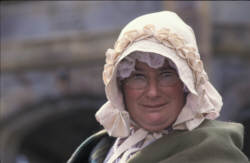 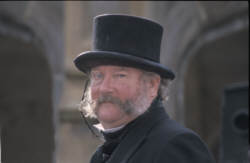 One of our Yorkshire members, Stuart Naylor, featured in a Victorian Weekend at Kirkby Lonsdale.  Stuart was a Victorian gentleman, while his wife Ann was a washerwoman.

Tacheback, a new fund raising event, held its ‘VIP’ party at Islington’s The Elbow Room.  GQ Magazine hatched the idea for two important reasons.   Firstly, to raise money for The Institute of Cancer Research’s Everyman (male cancer) campaign.  Secondly, "To return the moustache to its rightful place as a must-have fashion accessory".  As the Handlebar Club says - when was it not? 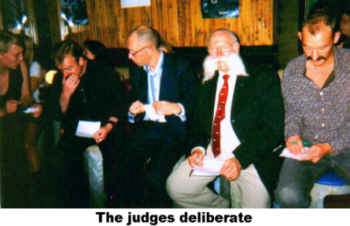 Representatives of the Club were invited to this ‘grand finale’ thus adding a certain patina (here I had to blag my ticket).  The lucky chaps were Mike Solomons, Rod Littlewood and myself.  Alas, our President was unable to attend owing to other commitments.  Mike’s wife Mary (and friend) were also in attendance.

The evening began with the usual manic flashing of cameras and cries of "are those real?".  Rod produced a variety of moustache accoutrements for the delectation of the press.  I saw very little of Mike that evening as he was draped with fans, press and charming young fillies having their picture taken. 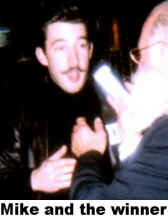 Joyfully, the ‘Goatee’ beard was strictly off limits, though I did spot one lurking behind a large sofa.  Tacheback were very accommodating and complimentary to the HBC.  Mikes roaring moustache made such an impression, they put him on the select panel of judges.

The young men of the evening had had limited time to grow their works of art.  The judges were required to choose the best style in the following categories: Top Tache, Trimmest Tache and Trashiest Tache (The HBC was barred from competing so I was sadly unable to enter that one... ).  Everyone strutted their stuff to hearty cheers and I must say the winners all looked very splendid.   The victors were all awarded top-notch Braun ‘Activator’ razors.   The winner of the Top Tache claimed the "Atters Moustache" inspired him...  A worthy winner I must say!  In all, over 60,000 pounds was raised for the charity.  This really goes to show the power of the moustache.  I am sure we all congratulate Tacheback on such a fantastic achievement.

Because a number of members have been finding it difficult to get up to 'The Windsor Castle' for 'First Friday' meetings, we had a local get-together for those from Kent and Surrey in the Royal British Legion club in Oxted on Wednesday, 19th. October. A number of us had been there before during the AGM week-end in Tonbridge a couple of years ago. We arrived for 12 noon and again had an excellent time with good weather and really delicious sandwiches. We were filmed for Finnish television, and also appeared in the local newspaper. A very pleasant interlude. 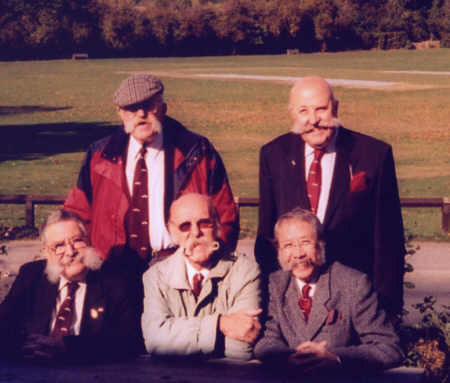 Our member Albert Tang featured in the October issue of the 'PELL-MELL & WOODCOTE', the journal of the Royal Automobile Club:-

Recognising artist/graphic designer Albert Tang in the Smoking Room at Pall Mall wasn’t difficult. A diminutive oriental man with a splendid grey handlebar moustache, he’s been growing whiskers since he was eighteen and is now a fully paid-up member of the Handlebar Club. 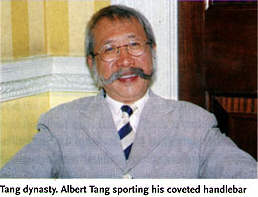 No stranger to clubs (he has been a member of the Royal Automobile Club for 11 years), Tang joined the Handlebar Club last year by qualifying for their strict membership with ‘a hirsute appendage of the upper lip with graspable extremities’. Started by a dozen moustachioed men including Jimmy Edwards, Raymond Glendenning and Frank Muir in 1947, the club history reports that ‘the object of the club was, and still is, to bring together moustache wearers (beards being strictly prohibited) socially for sport and general conviviality The aim of the Club was to assist by all means at its disposal, any worthy charity or cause. particularly those devoted to ex-servicemen. This aim still remains today and we have helped particularly with children’s charities.’
When Tang started experimenting with his ’tache, he found that a reasonably bushy growth with handlebar qualities could be achieved in just three months. He has attributed this to his mother’s side (his father being relatively hairless and his mother hailing from Northern China - where apparently hairy genes dominate).
Albert Tang’s moustache has been met with great enthusiasm in Japan where he spends part of the year. Not for him the slickly waxed sculptures of some handlebar wearers. He prefers it ‘wild and natural’, achieving the desired effect with efficient trimming and an upper lip shampoo and conditioner regime.
The club meets at the Windsor Castle pub in London every month and all members must wear their club tie. Before I began to despair of ever getting a ’tache-in on the action, Tang told me that ladies can either join the club if they meet the strict criteria (luckily I don’t) or become a Friend of the club (different tie) There’s no waiting list so I’ll be down the Windsor next month with my new tie.

There is a lot of interest in the world beard championships and an item in the "Sun" resulted in lots of invitations to be interviewed on radio and television.  (Though Ted "Hedman" did not make the statements attributed to him in the article!)
And the following week there was an item in the "Guardian". 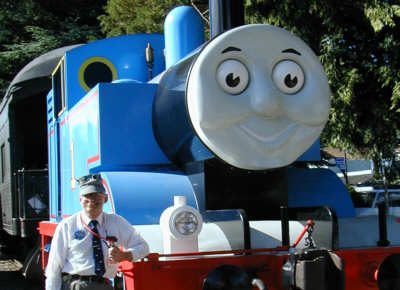 Handlebar Club member in good standing (he paid his dues) James Sackey of Snoqualmie, Washington (U.S. of A.), is the Visitor Services manager of the Northwest Railway Museum. As such he played the part of on-site ticket agent as the Museum hosted Day Out With Thomas® on 11-13 & 18-20 July 2003.

Except for the 12 weeks spent in the U.S. Navy boot camp, Sackey has always had a moustache of some sort.  It was only after his retirement from the US Navy after 20 years of honourable service that he was able to “let it grow.”  He learned of the Handlebar Club while he was visiting his son in a small town just south of Portland, Oregon (U.S.A.).  A small item in the “Oregonian Newspaper” caught his eye.  It was, in newspaper terms, a “filler item” a column inch worth of the obscure, odd or amusing.  This small item detailed the requirements for membership in the Handlebar Club dot Org dot UK and the quest was on.

According to the US Postal Service, the USPS International Money Order computer does not know that British Pounds Sterling, or Euro-Dollars exist.    Despite the United States Postal Service denying the existence of the United Kingdom as well as failing to acknowledge the European Union, Sackey was able to obtain funds acceptable to the Honourable Secretary.

During the summer volunteers of the Northwest Railway Museum operate the Snoqualmie Valley Railroad.  Using some of the vintage equipment, the train runs on weekends between April and October.   Until the permit and appeal process is completed to permit construction of a Conservation and Restoration Center, so repair and restoration efforts can be sheltered from the elements (this is the Pacific North Wet [sic]) the Museum must run diesel-electric engines.

The Engine is one of the newest bits of the train consist.  The engines used were built as late as 1954 or as early as 1951. Passenger cars range in age from 1916 back to 1912.  The 1912 era car is in much better condition and is much drier than the other famous transportation item delivered the same year.  Yes the Spokane, Portland and Seattle railway car is in much better shape than the Royal Mail Steamer Titanic.

Photographer Dan Calhoun is a member of and a volunteer at the Northwest Railway Museum.  He is in training as brakeman and fireman and will receive his certificates of proficiency when he reaches is 18th birthday