The HBC Christmas lunch is fast becoming one of our more prestigious Club traditions. As in the past, this years feast, held on Sunday 4th December, was very well handlebarred with Bo Jonsson in attendance all the way from Sweden. The usual convivial conversation and laughter echoed around Epsom RAC’s polished wooden paneling and I even managed to off a volley of waistcoat buttons in a salute to both Albert and his wife Kiyomi who kindly organized this sterling annual event open to Handlebars, partners and friends.

Following the sudden and sad resignation of Ted Sedman in November 2005, I have now taken over from him the mammoth task of managing the Handlebar Club website as it's webmaster. My most sincere thanks to Ted for his generous and professional guidance to set it up and I am please to announce that it is now up and running. I'll try my best to keep you updated with all the currnet news and events of the Club. Should members & friends wish to have their recent photos displayed in the "Gallery" section, please do send them to Steve Parsons our secretary. Hopefully the standard of the site would be maintained, if not better.

The Annual Bloodbath against the Pipe Smokers will take place on Wednesday 19th April at the Ship Tavern in Holborn. We need the support and participation of members to retain the trophy which the Pipe Club, despite losing it last year fair and square, refused to hand over ( or was it that their Secretary did not realise that it was in his office!!!)

Our award winning member, Steve Parsons, is organising a charity cricket match between the Handlebar Club and the Pipe Club of London on Sunday 13th August 2006 from 12.30pm at Thursley Cricket Club, Nr. Farnham, Surrey. This change of date from the previously suggested one is due to a change in the fixture list of the cricket club that are kindly providing us with the ground and equipment free of charge as well as a fully licensed bar !

He is planning to ask for a suggested donation from both players and spectators with all proceeds being split between the Primary Club ( the cricketers' charity that provides sporting opportunities for blind children) and a local Children's Hospice.

Please put this date in your diaries and come along if you possibly can. Surely it will be a fun afternoon and with a fully functioning bar, I'm sure we'll have a great time and hopefully make plenty of money for the charities whatever the weather throws at us.

We will of course be looking for players to represent the Handlebar Club, so if you fancy a nice gentle game on a sunny (?) Sunday afternoon please kindly let Steve know. More details and directions to follow nearer the big match. 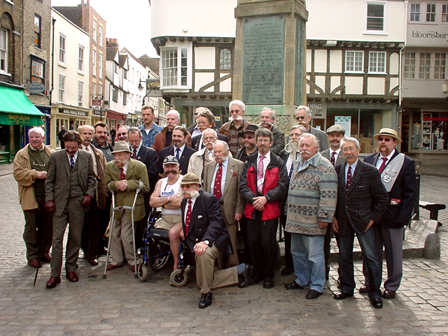 Rosemary and I arrived in the afternoon of Thursday, the 6th., to find that a few had already arrived. It was not until the following morning that people really began to arrive from all sorts of places - Germany, Belgium, Holland, Sweden and the United States. It was great to see so many from abroad, I think they were more in number than Handlebar types. HOWEVER, there was serious business during the early Friday evening when we held the AGM itself. All was very well organised and we proceeded through the agenda. So, having retired as Newsletter Editor I’ve now been dusted off and made President. When the results were announced I was in the loo and was greeted on coming out with congratulations. One item which is of general interest is that the annual subscription remains the same.
We then had a very good dinner and a few items were auctioned. One was a San Francisco Police Officer’s shirt which brought in a tidy some especially after it was modelled by Keri Martin. The following day there was a guided tour of Canterbury Cathedral to which most of the party went. This was very ably arranged by Mike Solomons who did a fantastic job once again of organising such things. Mike also ran the raffle and auction which we had after the dinner on Saturday evening. The auction was rather unique in that all the items, apart from just one or two, were moustache cups. And a pretty good selection there was too.

This month witnessed our traditional battle of aerodynamics, mathematics and dexterity against The Pipe Club of London - and all in the name of social conviviality and nicotine stained thumbs. I of course refer to our annual darts match. Tradition was maintained in that our old friends whipped us once again (2-1). As usual, the coveted Heineken Trophy remains snugly nestled within its now familiar PCL shoe box. I am pleased to report that this years raffle money goes to the RSPCA (as desired by the match winners). On a rather sad note, it seems highly likely that our annual match may now be at an end. Tony Blair’s “nanny goat state” (my own opinion of course and not necessarily that of the our Clubs) dictates that next years charitable and friendly pipe and moustache gathering will be classed as a criminal offence. A public smoking ban can only be a good thing - but we should surely be permitted to smoke in a sealed off room during a private club meeting? Perhaps we should hold our darts match against The Hooded Muggers Yob Club of London; our "fluffy" government would probably give us all a grant. Ah well, it seems nanny wins the trophy in the end

On September the 1st 2007, the Handlebar Club will be hosting the World Beard & Moustache Championships in Brighton, East Sussex. An Organization Committee has been formed and now consists of Michael Attree (Atters), Albert Tang, Rod Littlewood and William Brown. HBC Friend Geoff Pye has also kindly offered his services as Project Co-ordinator. We have booked the prestigious Brighton Centre (which also hosts Labour’s Annual Party Conference) for the award ceremony and we are working closely with the local Tourist Board. Not only do we need to raise sponsorship to host this biannual event but we also wish to raise money for various charities. Our main charity will be the Sussex based Rockinghorse Appeal. They are a sterling organization who strive to provided under funded children’s hospitals with medical equipment and facilities.

For the computer literate amongst us, our official WBMC 2007 website is: http://www.handlebarclub.co.uk/wbmc.html

Julie Muscato from California, a friend of our Club Secretary Steve Parsons, was in London for just one day and so happened to coincide with our May 'first Friday' meeting at the Windsor Castle. Full of excitement, she came along and met up with a few of our Handlebar members for a very enjoyable and memorable evening. 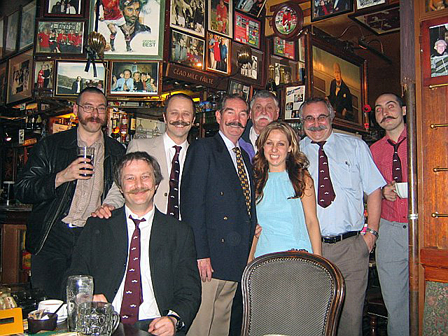