Alan Walter Gear was born on the 2nd February 1916 in the Redhill area, where he went to St John's School and then on to the Grammar School. After leaving school he went to work at Hall & Co. and with his brother developed a love for motorcycles.

Alan joined the Royal Air Force Volunteer Reserve in April 1939 and carried out his elementary flying training on Magisters at Redhill. He was called up in September 1939, and posted in October for initial flying training at Woodley. However, whilst there, Alan had a motor-cycle accident and was badly concussed, delaying the continuation of his training. 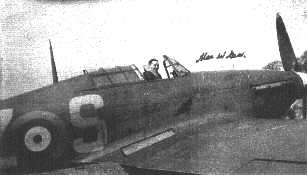 In May 1940, Alan went to Ansty for a refresher course, before being posted to No 12 Flying Training School at Grantham. He subsequently moved to No 5 Operational Training Unit at Aston Down in September 1940 and joined No. 32 Squadron at Acklington two weeks later, flying Hurricanes. He served with the Squadron subsequently at Middle Wallop, Ibsley, Pembrey and Angle, and stayed with them until October 1941, latterly flying mostly convoy patrols. He was then posted to the Central Flying School at Upavon to become an instructor.

Alan initially instructed on Masters at Hullavington, from December 1941 until July 1942, then at the Operational Training Unit at Balado Bridge for a few weeks, before moving finally to Errol, where he taught Fleet Air Arm pilots on the Swordfish, Albacore and Walrus aircraft.

In October 1942, the by-then Warrant Officer Gear was posted to 72 Squadron with Spitfire Vs at Ouston and, in November, went with the Squadron to North Africa. On 72, he earned the nickname Sexton – quite why, no-one can remember, although the name was often abbreviated to the first three letters and then sometimes used with his surname! He was also renowned for always wearing his topee, which must have presented an interesting sight with his moustache. At this time, Alan had been carefully cultivating his moustache, following a wager with a RAF colleague to see who could grow the longest one. He always maintained that he wore it sticking out of his oxygen mask to frighten off any close flying German pilots!

Alan then went with the Squadron to Malta for the invasion of Sicily, flying sweeps and bomber escort missions. They finally moved on to the Italian campaign, flying beachhead patrols over the landing beaches.

Having been commissioned on January 11th 1943, Alan was posted away from 72 squadron in October 1943 to become a test pilot at Foggia. In early January 1944, he force-landed his aircraft after his engine failed and in the accident suffered severe injuries, which included a broken back. He was subsequently invalided out of the RAF in early 1945 as a Flying Officer.

After he was invalided out of the RAF, Alan went back to Hall & Co, where he became the Depot Transport Manager. Someone who worked with him there said that he would get very cross with the drivers and staff in the yard, but was very charming with the ladies; a typical fighter pilot! He was a person who couldn't suffer fools gladly and two people, who were friends through membership of a Wine Circle said, quite independently, that he could be pleasantly aggressive if he disagreed with you, not that it affected their friendship, and that he could be very determined. Characteristics that were undoubtedly of value when he was flying. 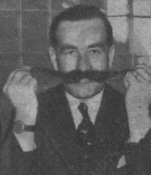 The Handlebar Club was founded in April 1947, and Alan joined in September 1947, remaining a member for nearly fifty six years. In 1948 he was appointed the new "Prime Handlebar" by the unanimous vote of club members during a cricket match against Copthorne (just a mile away from where his funeral service was held). Because no-one had a ruler or tape measure they used a lady's six-inch nail file to measure his moustache, and it was found to have a span of 10 inches, then an all-time record. The full report of this event can be found in the Club Archives, as are reports of other occasions in which he took part, the last being the 50th anniversary of the founding of the Handlebar Club, held at Eastbourne in April 1997.

Alan had many interests after the RAF in spite of his mobility problems. He kept his lawn free of weeds and one way to get him going was to tell him you had found a weed in it! He and his wife Freda loved horses and went to the equestrian events at Hickstead and made many many friends there, as they did on their frequent holidays to the Shetland Isles and to Lanzarotte.

After Freda’s death in August 1995 Alan continued to show great determination in spite of his deteriorating health, but in the end he passed away peacefully on 22nd May 2003.

So you can see that a picture has been built up of a man who made and maintained many friends, who remember him for his loyalty and determination, and a man who had served his country gallantly in its hour of need.

We must all acknowledge that anyone who flew aircraft operationally in either of the two world wars was a hero. Alan was one of those men, and indeed his heroism was nationally recognised by the award of the DFC on 27th July 1943. The citation reads:

"Warrant Officer Gear, who is now on his second tour of operational duty, participated while in England in numerous sweeps over the Channel, including several to the Brest peninsular. During the campaign in Africa, he has destroyed two enemy aircraft and damaged several more. He has had an exceptional influence among the pilots of his squadron which has undoubtedly had its effect upon the successes achieved."

As Winston Churchill said, "Never in the annals of human conflict has so much been owed by so many to so few".

Alan was one of those Few.

The above is based on the address given at Alan’s funeral by The Revd David Allonby, Chaplain at the RAF Memorial Chapel of St. George at Biggin Hill, and the account of Alan’s service career given by Group Captain Derek North, Sussex County President of the Royal British Legion.

Postscript:
A total of Ł1034 was donated to the Royal Star and Garter Home, Richmond in memory of Alan.  This is a splendid tribute to Alan and reflects the high esteem and affection in which he was held by his friends and acquaintances.