The Handlebar Club was founded in 1947, so we had the 40th. Anniversary Gathering in 1988 which says something about our mathematical abilities!  It was held at the Chequers Thistle Hotel in Horley, Surrey, and the following is taken from the report in the Club Newsletter.

Some of the Belgian and Swedish contingents had arrived the night before and during the afternoon various individuals and small parties arrived and we all got to know one another. Although the bars in the hotel had officially closed it was surprising how beer and other drinks were found!

By the time that the Annual General Meeting was due to be held virtually all those coming had arrived. The AGM started 10 minutes late because 2 members of the Committee did not appear on time - no names, no pack drill!!! We had a very good AGM but in view of the circumstances it was kept as short as possible. During this meeting we stood in silence in memory of John Roy and many kind words were said of him.

After the AGM we had a photographic session outside the hotel and the local Press and Australian TV took full advantage of this. Much of this was overseen by Ed Winpenny, one of our members from Yorkshire, who is a professional photographer. He also took many photos and a video. 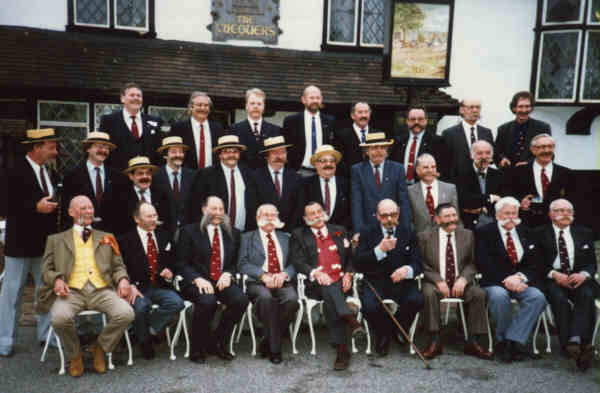 Then we eventua1ly had the long awaited dinner. I say eventually because it was a little delayed, there being another party in the hotel which was served before us, we were in no great hurry. The room was beautifully laid out and there was one long table right down the middle with our European guests on one side and the Brits on the other. 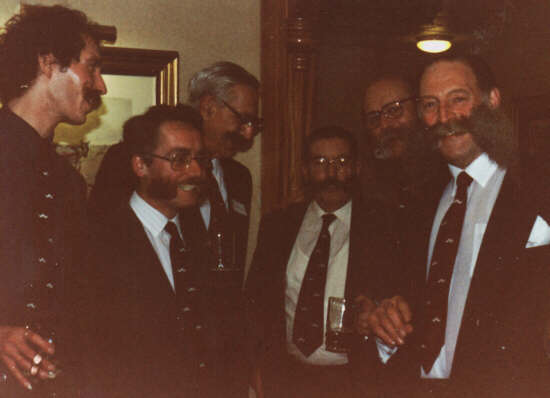 During the meal various presentations were made. From Sten-Erik Molker and his Swedish chaps we were presented with a ‘Gästbok’ - from which one can deduce that this is a guest book in which the Club can record attendances at meetings. This book was duly signed by all present. The secretary was presented with his diploma indicating that he is an honorary member of the Svenska Mustaschklubben and also a walking stick. But not an ordinary walking stick for it had been fitted with a bicycle bell and a clip holding a bottle of whisky!!! Frans van Haaren and his party - Harry Maertens plus their two charming lady wives - from the Eerste Nederlandse Snorrenclub presented us with a scroll - beautifully done - and a bottle of Bols gin (which was raffled eventually). Frans is known for giving speeches and this happened just before the dinner. I might add that he is also an excellent calligrapher. Finally, but by no means least, Willy Dupon and his party from The Snorrenclub of Antwerp presented us with a trophy which is a large golden coloured moustache and nose on a plinth! To all of them, thank you very much indeed, we were very pleased and honoured that you took the time and made the effort to come all the way that you did to be with us. After the dinner, this Club made presentations of engraved pewter tankards to Frans, Sten-Erik and Willy - which is our traditional way of showing our esteem for friends - and we hope that perhaps they can be used as trophies within their Clubs. 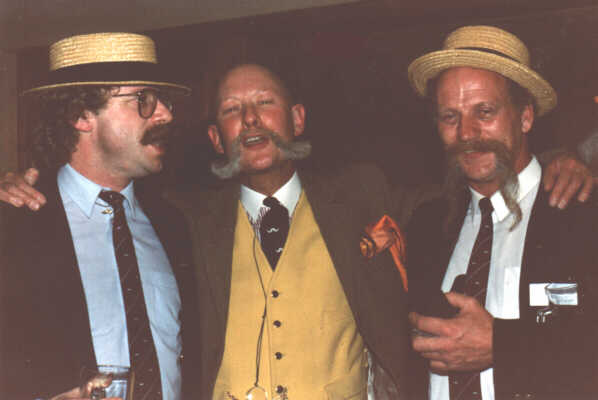 Getting back to the Dinner, after this we carried on chatting and at one time The Snorrenclub sang us their Club song which, like Frans van Haaren’s speeches, they’re wont to do on any suitable occasion! We still don’t understand a word of it even though we’ve heard it many times!!! But it is a jolly good tune! 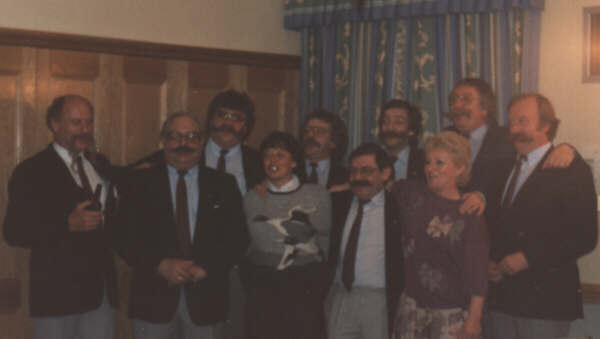 The following morning various people came down at various times to a hearty breakfast and for the most part they didn’t look the worse for wear. Adieus were said as people departed. The Belgians had to stay on until the following day as there were no planes back to Antwerp that Sunday.

But apart from it being a good get-together to celebrate our 40th. Anniversary this gathering had done one other very good thing. It had enabled a larger number of members of this Club to meet our friends in other Clubs and thus appreciate how things are with them. Hitherto just a handful of our members had made visits to other Clubs in Europe but now we hoped to see other members joining in.