In June there was a trip to Eindhoven in Holland to celebrate the 5th anniversary of the Erste Nederlandse Snorrenclub, and the annual "Fiesta del Sol".  In fact, although there was plenty of Fiesta, there wasn't a lot of Sol until the Sunday, but the welcome from the ENS was as warm as ever. 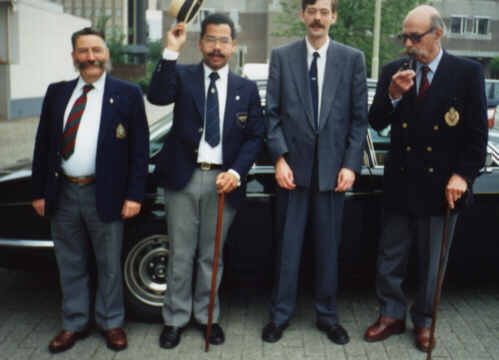 André and Van with two Dutchmen

Things really got under way on the Friday evening when, as the contingents from England, Belgium, Sweden and other parts of Holland arrived (the Italians did not show up until Saturday), it was announced that we would meet up in the bar of the Holiday Inn, where we were staying, at seven, and go into the town for the aforesaid F del S.  So at the crack of 9.30 or thereabouts (and a lot of beers later) we drifted off to a cafe with a tent out on the pavement and a band so loud that it was probably generating complaints from Antwerp.  The usual ‘pub round the corner’ to which we adjourned later - a nice looking pub which would not have looked out of place in the back streets of Portsmouth - was twice as crowded and had, so we were assured, the best traditional jazz band in Eindhoven.  Since jazz musicians are not renowned for the quietness of their instruments the result can be well imagined.  Took a long time to get into because we kept bouncing off the press of bodies.

Saturday was a quiet day, spent largely screwing one's eardrums back into place.   There was, however, quite a sudden storm which blew everything not actually nailed down to the pavement sky high.  Bodies running everywhere - looked for all the world like a scene out of one of the better

‘disaster movies’.  Result, nearly every bar in town had a resident moustache for the afternoon.

The highlight of the week-end, the ENS reception on Saturday evening, was fully up to the standard we have come to expect from our friends in the European clubs - pleasant surroundings, an excellent buffet, a good band and a graceful belly-dancer.  A most enjoyable evening and our thanks went to our Snorrenclub hosts, the ENS.

On Sunday morning there was a meeting to discuss the projected "Euromoustache Federation", and in the afternoon a visit to Neuen, a village famous for its Vincent van Gogh  associations and whose centenary it was that year.

And so we boarded the appropriate form of transport and returned home after a memorable weekend.