Following the success of the 50th anniversary weekend we decided that it would be a good idea to have a weekend away from London for our 1998 A.G.M.   Leicester was chosen because it is close to the East Midlands and the home of the "Nottingham Nest". 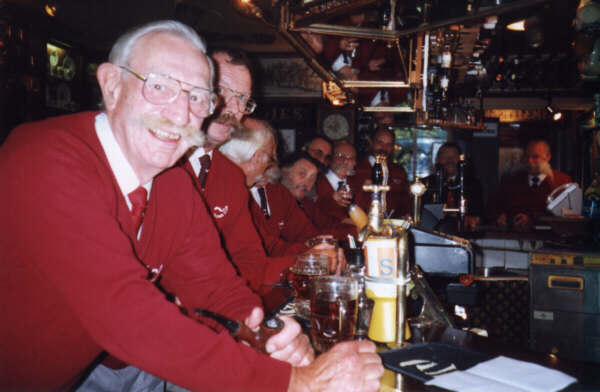 The Club in our natural environment - the bar of the hotel

As well as appearing on the local news programme of Central Television, we made the front page of the Saturday "Leicester Mercury", which created considerable interest when we went shopping in Leicester that day.  Then, on the following Monday, a picture and article appeared in the national newspaper the "Daily Mail".

Picture from the Leicester Mercury 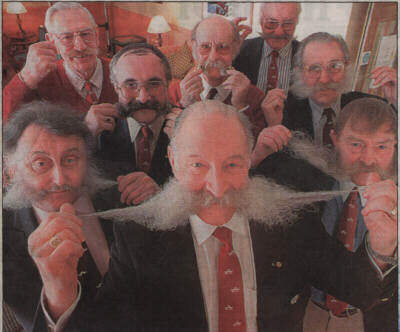 From the Daily Mail

Double whiskers all round

They came, they twirled, they compared. The luxuriantly-moustached members of the Handlebar Club held their annual convention at the weekend. Dozens of men, wearing their club ties with pride, flocked to the event in Leicester to discuss the burning issues of facial hair in the nineties.

Taking centre stage, above, was club president Ted Sedman, 60, of Mytchett, Surrey, whose 5ft 3in from tip to tip gives him the longest moustache in Britain.

The Handlebar club, founded in 1947 by comedian Jimmy Edwards, works for charitable causes at home and abroad. It has 98 members including 50 in the UK, all of whom must have a ‘hirsute appendage with reasonable proportions and graspable extremities’. Beards, however, are frowned upon. Spokesman David Stones, a former stand-up comedian from Wembley North London (12 inches tip to tip), became a member of the club through his friendship with Jimmy Edwards. Mr Stones said: ‘When you’ve got moustaches as long as we have you can’t really go anywhere without causing attention. Thick soup, custard and candy floss are to be avoided. People always ask me, "Do you actually like having such a moustache?" I always say, "Well, after a while it grows on you."

‘Why do we do it? Well, it takes a certain degree of flamboyance. It’s facial adornment, like a hobby I suppose. Why do people dye their hair and wear earrings or make- up?’

Letting slip a trade secret, he added: ‘Most of us use some form of wax, although there was a time once when I ran out of wax and used dry soap instead. But I went out later in the day and it began to rain, which caused problems because I looked rabid within minutes.’

Not surprisingly, he says, the club does not have any female members.

‘I did see a woman in Tesco’s the other day who fulfilled our membership criteria but I passed that one by.’

(Strangely, Ted was wearing his maroon Club jumper when the photograph was taken, not a blue one.  The wonders of modern technology!)

Then, at Easter, our secretary went into the stocks at the "Lucky Rover" pub and had wet sponges thrown at him (with other club members encouraging the throwers!).  He raised Ł60 for a children's hospital. 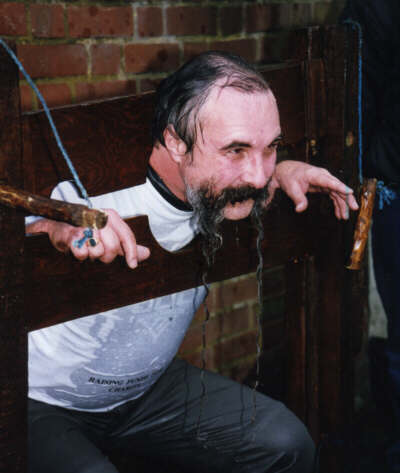